You are here: Home / Inspiration / Unblocking a Leatherworking Project Idea

Do you have leatherworking project ideas that you’ve sat on for a while? When I develop a new piece, it might slowly stir in my mind for weeks or even months. I’ll get an idea for a project, but then maybe do several unrelated projects in between until my original idea further refines and I’m ready to take the plunge. Many of you write to me about ‘getting stuck’ in this way; it’s like a kind of writers block. But sometimes an idea requires more thought. A good way to un-stick yourself is to gather more ideas from other sources, such as Instagram or Pinterest, to solve potential issues in construction or design that might be blocking your flow.

Making a pair of leather sandals is my current project that I’ve been sitting on for a bit. Shoes in general have been an unexplored category of leatherworking for me. My focus on the skills needed to make bags and wallets seemed ill suited to transition shoe making. One difference is that shoe making requires a certain kind of precision; you can build a bag one inch longer than you had originally intended and nobody will notice, but building a shoe one inch longer means you have a shoe that doesn’t fit. Making a leather piece to fit an exact size created a mental barrier and stopped me from jumping into it.

My final thought, and this was months ago, was “sandals would be easier, they’re more forgiving on sizing.” I let that thought go and it stewed in the back of my mind. Sometimes, projects can seem intimidating and one way to overcome that feeling is to modify it so that it is more doable. In this case, shoes felt intimidating because they require more precision, so instead of giving up, I found a related project that removed the aspect of the original project that was a barrier for me. It’s also a way for me to build up skills to do a harder project. While sandals also have to be the right size, you don’t necessarily have to get an exact fit to make a wearable pair.

However, the inspiration to begin learning to make shoes by starting with sandals didn’t happen in a vacuum. It began when I replied to a post where someone had tried making sandals, which made me remember Michael who makes sandals in Maui, and how nice they were. When I mentioned this on the thread, others in agreed with me and this got me thinking more about sandals, including their construction and their maintenance. As anyone who has Michael visited will know, keeping up your sandals is a big deal to him. When I talked to him, he also showed me an old well-maintained pair and a poorly maintained one. By making leather sandals, I could potentially make a pair that would last me 10 years or more. I thought, “hmm, an even more enticing idea.”. This also goes to show that sometimes surfing the Internet can do more than just waste time!

What finally cemented my desire to pursue this project was the sad state of my current sandals. 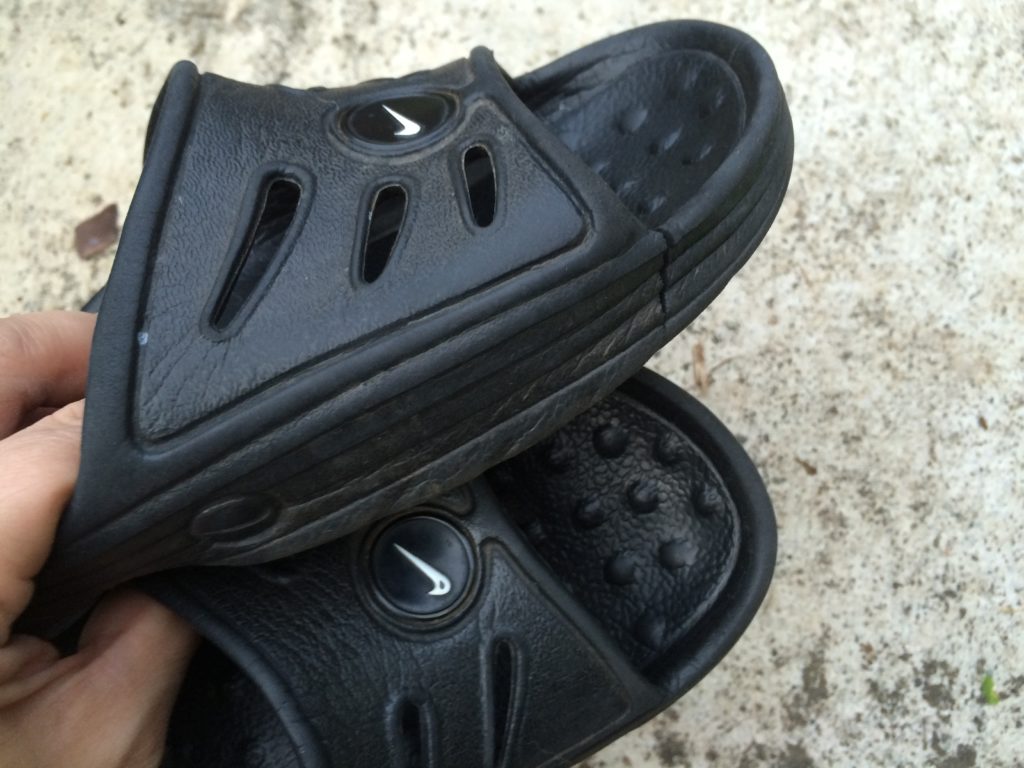 These are Nike knock-offs that I picked up in a local market while traveling in Asia. You can see the big crack where the top piece meets the sole. Unsurprisingly, doing zero maintenance on rubber (or plastic?) sandals wears them out fairly quickly.

As I was thinking of getting a replacement pair, the sandal-making idea finally gelled and I embarked to make my own. I want to make a well-made pair that will last a long time. I’m looking forward to using what I know about making other leather goods and apply it to sandal-making.

Do you have a project that’s been siting in the back of your mind for a while? Does the complexity intimidate you?

You don’t have to wait as long as I did to overcome your block. Picking a related project or modifying your original project to remove a seemingly difficult part can sometimes lead to the breakthrough you need to get started.

Let me know if you’re currently stuck or how you worked through a block if you’ve managed to overcome one.