You are here: Home / Inspiration / Nigel Armitage: A Wealth Of Leatherworking Knowledge Both Close And Far From Home

Shortly after Stevie Bea graduated with a degree in fashion photography, she found herself at a pub in Tooting, London discussing leatherworking with a young man. While she was quite familiar with the craft, it wasn’t something she was focused on at that time in her life. As the conversation continued, the young man described how he had learned so much from a set of in-depth tutorials on YouTube and one man in particular.

“His name is Nigel Armitage. Have you heard of him?” the fellow said.

And so Nigel Armitage’s daughter learned what many in the leatherworking community have already known: Her father provides a great wealth of knowledge to would-be professional leather-goods makers around the world. Nigel has been teaching in the East Staffordshire area in England and making leather goods for almost 30 years.

Figuring it out for himself

Nigel’s journey began back in the 80’s when he visited a local saddler to have a scabbard made. Though the old saddle maker took several measurements of the project, he seemed resistant to the idea. He shooed Nigel away to come back in a week.

When he returned, the saddle maker begged him off again saying, “Yes, yes, I’ve made your scabbard but it’s in the boot of my car. And that car is unfortunately in the garage at the moment. Come back next week!”

Things did not improve for Nigel the following week.

“I returned the following week and the car was sitting out front but no scabbard in the boot. At this point I smelled a fib, so I asked the man to sell me some leather and decided I would make the scabbard myself… it was glorious…

“Actually it was complete tat, but here’s the thing; I had made it myself, I was so proud. I had thrown it together using these big darning needles and some carpet thread. I had even thought to hide my stitching by having the seam on the back, I was hooked and I’ve been doing leatherworking ever since.”

Nigel took to self-teaching and reverse engineering pieces to understand how they were made. It was much harder for him to become good at leatherworking because, at the time, there was no Internet, no easily accessible tutorials, decent books or information on where to source hardware, leather or other materials.

By chance, a friend noticed what he was doing one day referred him to a different saddle maker who could teach him and show him the leatherworking resources all around him. 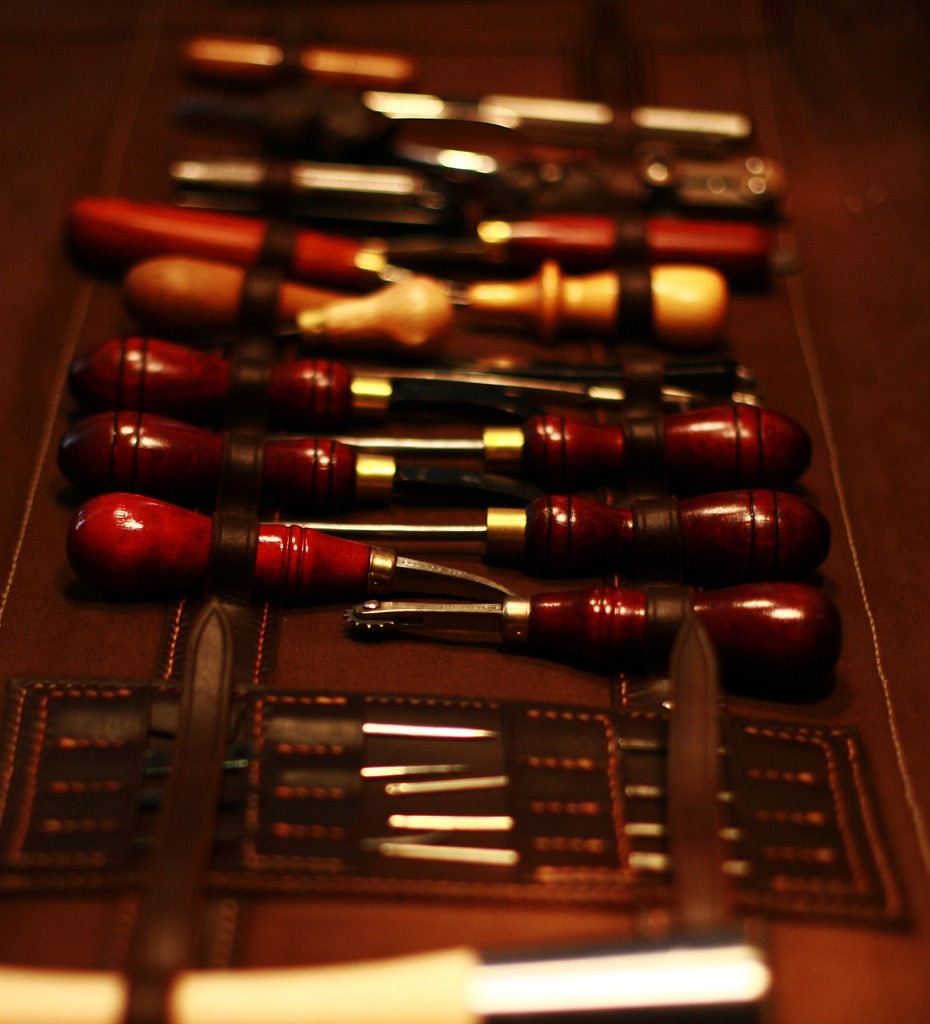 Living in the center of it

Once he was shown the way, immersing himself into the craft became much easier. He was located near the West Midlands and Walsall, which has been the center of the leatherworking world in England for over 200 years. Now that he knew where to look, Nigel could pick up buckles, tools, leather or any resource that he needed for making leather goods.

He made a name for himself as a bespoke leather-goods maker. With the knowledge he learned from the saddler and his own determination to improve his craft, Nigel is now an expert in his own right. He earned the title Master Leathersmith, as well as an Associateship to The Guild of Master Craftsmen and is an NVQ A1 Assessor.

He tailors his work to the specific style and needs of each person, making each project unique. Over the years, Nigel has built an enviable list of clientele, including customers from the English Field Archery team, British Rail, British Boxing Board, Harrods and Rolls Royce.

Dividing his time between teaching and making

Nigel’s bespoke business is still the main part of his day, but he spends more and more time teaching. With his daughter’s newfound interest in the craft, he is helping her to expand the family business.

Stevie Bea is also a recent addition to his growing roster of students and apprentices who, under his tutelage, are able to make significant breakthroughs in their craft.

“I really enjoy my teaching time and love it when my students are able to work through difficult projects and new techniques” Nigel says. “The elation on their faces when you’ve pushed them beyond what they thought they were capable of doing … that’s really rewarding. That’s the part that I’m really loving at the moment.”

His inspiration to teach came from his own difficulty in finding resources and tutors.

Changing landscape of leather industry in the UK

Although there were many leather tradesmen and suppliers when Nigel first started, most have now retired or changed professions.

“There were dedicated saddle makers, bridle makers and harness makers. These had all been separate shops along with belt makers, luggage makers and handbag makers,” Nigel recalls.

Today, most leather-goods makers have consolidated their businesses into one shop or even one person. Others have closed entirely. Most recently, Dixon Tools, one of England’s premier leather tool manufacturers went out of business. The decline of horses as primary mode of transportation meant that demand for these trades diminished. This change, combined with modern alternatives to leather and more disposable goods, continues to shrink parts of the leather industry.

To make things even more difficult, Nigel found the UK leather trades in general to be more secretive and selective. For instance, although his teacher vastly improved Nigel’s leatherworking techniques, he did not teach everything, perhaps out of fear of creating another competitor in a shrinking business. This guarded approach was typical of the time and is sometimes still found in leather industry today.

All of these factors contributed to Nigel’s decision to reverse the trend. Instead of guarding his knowledge, he began teaching out of his workshop in Burton upon Trent. However, most people know Nigel from YouTube through a series of free tutorials and follow-along construction videos, he has been able to reach a global audience of beginning and up-and-coming leather-goods craftspeople. 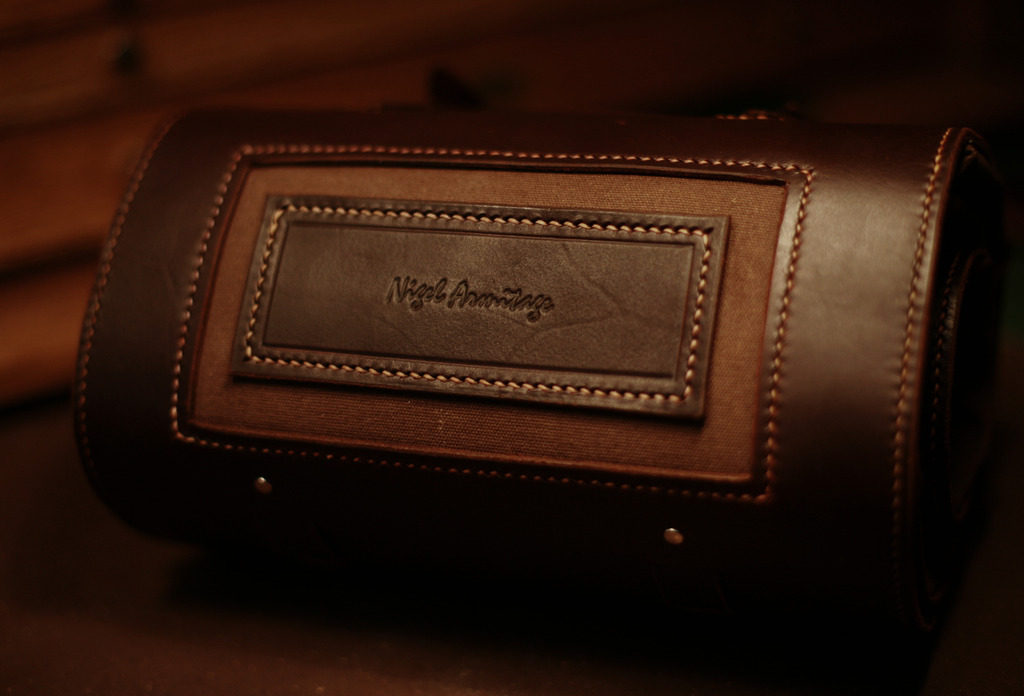 Bringing someone up quickly

Nigel has not remained static in his teaching style. Over the years he has refined it and improved it to the point where he can be much more effective in a short time.

Normally, he works with someone for about three months to get them to a point where they can make something worthy to sell. However, Nigel can work with a student to make a basic wallet or belt within just a day’s worth of teaching.

He adapts his traditional training and his own learning experiences because he believes that the most important thing in the beginning is to build confidence in a student and get them started.

If a person has the inclination to learn leatherworking and is serious about improving, they can continue to learn on their own by watching his YouTube videos. Nigel started producing these videos to enable people to learn on their own and also break the tradition of secrecy and stinginess that he experienced when he was learning from old tradesmen.

Most would-be leather craftspeople opt to do in-person training, but there are a few who can learn a skill by watching it, repeating it and then continuing to refine it. Nigel hopes this audience will benefit from the self-learning digital path he created.

Nigel has two pieces of advice for his students. The first is to continually improve your awl work when hand sewing. A common indicator that someone is a beginner is uneven stitching on the back. A pricking iron will mark the stitch for you and create a good guide on the front but your hand-awl proficiency will determine whether the back turns out equally good.

His second piece of advice: Find your signature. It’s very easy to look at what’s out there and repeat it. Many people start out their business making wallets, belts and simple messenger bags because they’re easy. However, this tactic makes it more difficult to stand out and the work gets lost in a crowd of similar items. If you can make your work distinct, whether in style, design or choice of product, you’ll be able to differentiate yourself from other makers.

Some of Nigel’s tools have also become quite renowned, such as his log, Dave. You can also join Dave TheLog’s fan club on Facebook.