You are here: Home / How Tos / Saddle Stitching Video Round Up

Today is a round up of saddle stitching videos.  Saddle stitching is one of the strongest stitches that you can do and is much stronger than a machine stitch. Unfortunately, it also has to be done by hand.  Why is it stronger?  Barrett Alley has a nice explanation and a nifty diagram here: 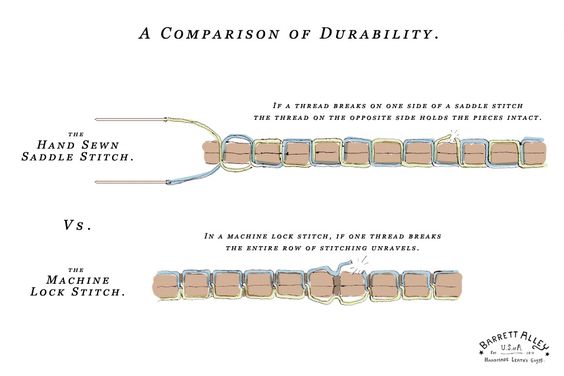 *looks like Barrett Alley’s site went down so we posted the image above.

There are many techniques to doing a saddle stitch but the basic principals are the same. Two needles, doing figure eights down a line at the edge of your material.

If you’re a complete beginner, I’d suggest Al Stolhman’s book on hand sewing. It has a nice, illustrated example how to stitch in the fastest and most efficient manner: two handed with an awl. Also the book is downloadable from Tandy so if you’re into immediate gratification, you can pick it up instantly.  There’s also the paperback version of Hand Sewing Leather on Amazon if you’d rather have a hard copy.

Some of the videos below don’t follow this technique but I included them so you could see saddle stitching from different viewing angles and also to illustrate that there’s more than one way to do this. As I mentioned, I think that the two handed with awl method is fastest but you might find some of the other methods better suited to your dexterity/preferences.

Some things that these videos don’t cover: punching the stitching holes, waxing thread and threading the needles. Punching stitching holes will vary depending on what tools are available to you but I highly prefer pricking irons. They make smaller holes and straighter lines than punches, drills and stitching wheels.  Stohlman’s book shows how to use a stitching wheel and then pre-punching with an awl but I think that using pricking irons is both faster and saves sharpening on your awl.

Waxing is pretty straightforward- you can get a feel for if you’re over or under waxing as you go. Same things goes for threading the needle. There are techniques for both, maybe worth separate postings on their own.

People say that he’s moving a little slow but i think it’s still good technique. If nothing else, this is how you should feel when saddle stitching, relaxed, not frantic and even pace.

Doesn’t use an awl in this example but this video is a good view from the side. Like the previous example, the holes are pre-made.

Saddle stitch starts at 2:50. A good example of how to keep the threads in the same order consistently. George sews back to front (opposite of what Stohlman and the Hermes way ) but the front to back way is similar. No awl here either and kinda bigger holes.

A much slower version but clearer than the previous video. Again the same principles apply but the technique is different. He uses both needles at the same time and only uses the awl in a few places. IMHO using both needles at once is slow goings but it might make more sense for you.